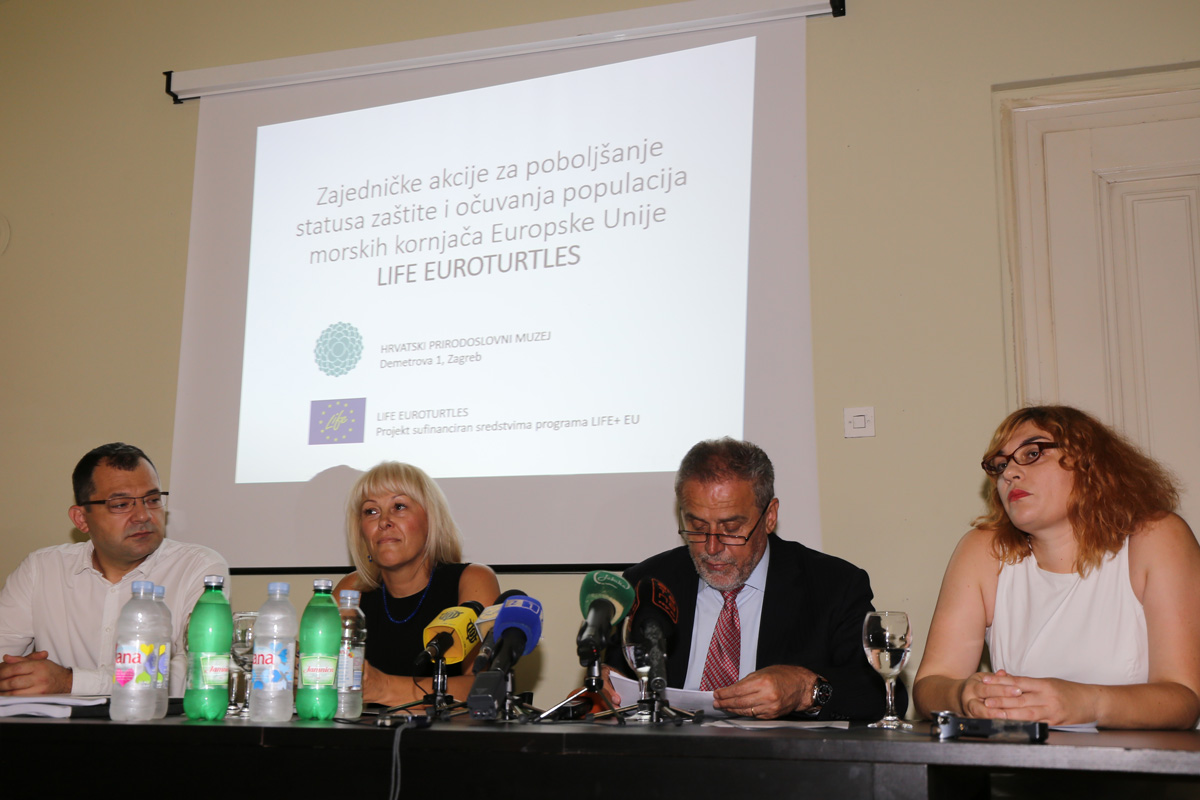 Croatian Natural History Museum and eight partners from six EU countries have succesfully applied for funding on EU LIFE financial instrument. Project „Collective Actions for Improving the Conservation Status of the EU Sea Turtle Populations – LIFE EUROTURTLES“ worth 5.1 milion Euro will be co-funded with 74% by funds of EU LIFE program. Project will have duration of five years and is coordinated by Croatian Natural History Museum. The official start of the project will be on 1. September 2016.

After signing the co-funding contract, Croatian Natural History Museum in Zagreb held press conference announcing the main aim and activities of the project. LIFE Euroturtles will for the first time, unite and coordinate sea turtles conservation activities in most important countries and areas for conservation of loggerhead and green turtles in European Union.

Dr. Draško Holcer, project coordinator said “Sea turtles are strictly protected species in Croatia and EU. Within the EU, the area of northern Adriatic, particularly eastern part along the coast of Istria and Kvarner, is one of the most important area for feeding and wintering of loggerhead turtles. But, sea turtles that are growing up near our shores travel through the Mediterranean, particularly during the nesting time when they return to nesting beaches in Greece, Cyprus and Turkey. Therefore, this joint action on all areas that present their home range is crucial for their protection. Nine partners from six Mediterranean countries – Blue World Institute of Marine Research and Conservation, Sea Turtle Protection Society of Greece – Archelon, Department of Fisheries and Marine Research, Ministry of Agriculture, Rural Development and Environment Cyprus, Nature Trust Malta, University of Cyprus, Department of Biology and Biotechnologies “Charles Darwin” – Universita degli studi di Roma La Sapienza, University of Primorska – Koper, WWF Italia and CNHM joined their forces and knowledge in this colaborative effort aiming at region-wide aproach in sea turtle conservation”.

Dr. Martina Šašić, head of Department of Zoology, shortly presented numerous activities in bidiversity conservation carried out by the CNHM. She stressed continous work of the Museum and the role it had in establishing the first sea turtles research program in Croatia over 20 years ago. “For our Department and CNHM this is continuation of decades of activities in sea turtles conservation. Our first project was carried out in 1997. when our colleagues, dr. Bojan Lazar and dr. Draško Holcer, with support from RAC/SPA in Tunis made inventarisatrion of potential nesting beaches along the Croatian southern Adriatic coast. Research lead by dr. Lazar provided the first information on species presence and large impact of by-catch. One of the results of this work was also legal protection that was givent to all sea turtles in Croatian waters in 1995.”

Prof. Tatjana Vlahović, the director of the CNHM thanked the City of Zagreb and Mayor mr. Bandić for their continuous support. She also said: “LIFE Euroturtles is the largest project in nature conservation that CNHM has been leading by now, and of particular importance as it has been funded directly through european funds. I believe that centuries of experience in nature conservation, research and public awarenes that CNHM has, will enable fruitfull cooeration among partners and succes of this project. I would like also to thank all the partners for their cooperation and trust they put in the CNHM’s leading role for this large project.”

Finally, the Mayor of Zagreb, mr. Milan Bandić said “Todays press conference informs the public about this valuable and important European project aiming at conservation of sea turtles. I am congratulating Croatian Natuarl History Museum as this is an excellent example of connecting science and public awareness activities carried out in a museum. This has also been recognised by European Union, confirming how important ecosystems and species conservation is for our future. We can be proud that our Zagreb’ museum participates, and even more – coordinates this entire project”