Spatial information is of a crucial importance for the effective conservation management of sea turtle populations and identification of high-used habitats. One of the LIFE EUROTURTLES project partners, University of Primorska, has developed a new device that uses Snapshot GPS system for obtaining locations. Once the turtle surfaces the GPS data are transmitted through GSM network, if GSM signal is available. 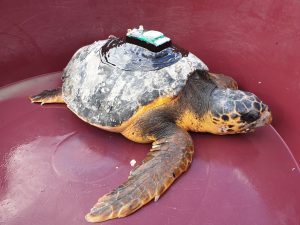 With lowering of the sea temperature, sea turtles enter in the period of inactivity when they are resting at the sea bottom. During this hibernation period they often get by-caught in trawling nets. Following several workshops that were organized to educate fishermen on the simple treatment techniques they can adopt on board in order to reduce the mortality of sea turtles after release, Blue World Institute started with the GSM tagging of the by-caught sea turtles. Those turtles that are caught in the comatose state are placed in the Sea Turtle Rescue Centre for a few days. After short recovery they are released back into the sea with the newly developed GSM tags. During the last three weeks a total of five loggerhead turtles were tagged and released from Sunčana uvala, Mali Lošinj. The telemetry data obtained in this way will be analyzed in order to identify sea turtle hot spot areas and to establish first NATURA 2000 sites for loggerhead turtles in Croatia which will contribute to the increase conservation status of the species. 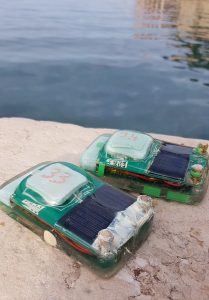