The Oceanographic Centre, University of Cyprus (OC-UCY) is encouraging the public in Cyprus to download a smartphone app aimed at collecting information on observations of sea turtles in the wild.
The app was developed by Croatian Natural History Museum and its partners in the LIFE Euroturtles project cofunded by the EU with the aim of improving the the conservation status of the Loggerhead and Green Turtle. It involves nine organisations from six Mediterranean countries.

The ultimate purpose of the application is to help improve the management and protection measures for the two species of sea turtles, Loggerhead (Caretta caretta) and Green (Chelonia mydas), which spawn in Cyprus and the rest of the Mediterranean and are considered as protected by the European Union through the Habitats Directive.

Launching a 24/7 rescue hotline for sea turtles on Cyprus

The University of Cyprus in collaboration with the Department of Fisheries and Marine Research, have launched a 24/7 rescue hotline for sea turtles on the 1st of January 2018. If you spot an injured or dead sea turtle in Cyprus, call +357-96952929.

First diving expedition to reduce the impact of ghost gear

The Oceanography Centre (OC) and the Scuba Diving Team of the Athletic Centre of the University of Cyprus (UCY), carried out the first diving expedition in the frame of the implementation of action C6 – Reducing the impact of ghost gear in turtles, on December 1st 2017. The diving expedition was carried out by OC-UCY divers and the diving Instructor of the Scuba Diving Team of the Athletic Centre, Yianno Mylona, as well as with the support of the local association of professional fishermen, in the area of Latsi, near the Polis-Gialia Natura 2000 site (CY4000001) in the northwestern part of Cyprus.

The purpose of this diving expedition was to identify the exact locations of abandoned fishing gears (ghost gear) and to begin with their removal. The identification of the locations of ghost gear also stemmed from interviews the OC-UCY team carried out during the summer months with local fishermen and divers.


After removal, the ghost gear will be placed in collection bins that have already been placed in the target areas of this action: the port of Latsi and the fishing shelters of Pomos and Kato Pyrgos. These discarded ghost gear will then be recycled by ENERCO Energy Recovery Ltd, a subcontractor of UCY, and converted to energy.
Ghost gear constitute a serious threat for sea turtles, which can get entangled in them and as a result drown. This action aims to directly benefit the sea turtle populations by reducing the number of incidental entanglement and death of sea turtles in ghost gear.
UCY Press Release
Cyprus mail – Diving mission helps threatened turtles

Fieldwork for the implementation of the project actions on Cyprus 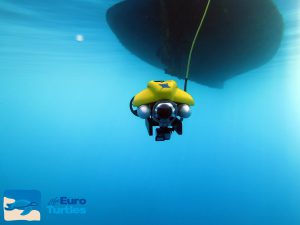 In the frame of the implementation of LIFE EUROTURTLES actions, Oceanography centre’s stuff visited Latsi area on 24-26/07/2017. During the visit, an ROV (Remotely Operated Vehicle) was used in order to record the sea turtle foraging grounds in the Polis-Gialia Natura 2000 site (CY4000001) as well as identifying the possible location of abandoned fishing gears (ghost nets) that will be removed in next steps of the project. These records will be combined with the information from the interviews to the fishermen and divers that were also implemented during the field trip.
Ghost nets constitute a serious threat for sea turtles as well as for other marine organisms that could be traped in them and die. 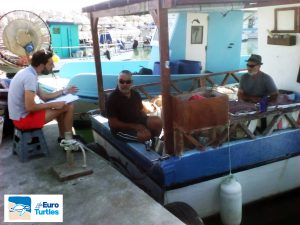 Interviews were given also by the tourists for recording their view on the sustainable economic development of the area based on the preservation of biological diversity. Moreover, the visitors of the area were also informed about the actions of LIFE EUROTURTLES.

The education kit of the LIFE EUROTURTLES project was translated in English in 2020 and is now available for distribution to both Greek and English speaking schools. Activities for the student’s book as well as the Ppt presentation of the English version have been used in ARCHELON’s field projects during information events for tourists and their kids and at ARCHELON’s Rescue Centre video-conference presentations to English language schools.
The package can be found under toolkits 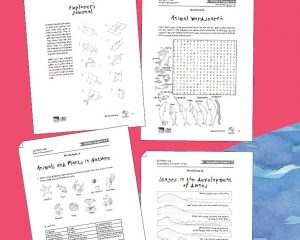